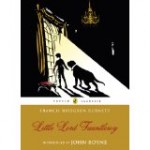 Little Lord Fauntleroy, written by Frances Hodgson Bennett, is a great book for children. It is about a little boy named Cedric. He lives in America with his mother who he calls “Dearest.” Cedric is a kind, loving, gentle boy. His deceased father was the youngest son of an English earl.

When Cedric’s father married an American woman, the Earl disowned him. One day, a lawyer arrives, and says that all of the Earl’s sons have died. That means that Cedric is the Earl’s heir. Cedric and his mother are to go toEngland, but Cedric’s mother is not to live with him.

Instead his mother is to live in a house by herself, while Cedric lives with the Earl. The lawyer tells Dearest that the Earl is a cross, grumpy, mean old man, with no friends whatsoever. But Dearest asks that Cedric is not told that his grandfather is a horrible man. When they get to England, Cedric is taken to his grandfather’s house. Little by little, Cedric wins his grandfather over, till he is much nicer. Then one day, a lady appears saying that her son has more right to be heir than Cedric does.

What will happen? Will Cedric keep the right to the Earldom? To find out you will have to read the book. I enjoyed this book so much for several reasons. First, I really like the way the author writes.  She portrays her characters in a way that captures your imagination. Second, it is an exciting story, full of suspense. This is an outstanding book for ages 8 and up.