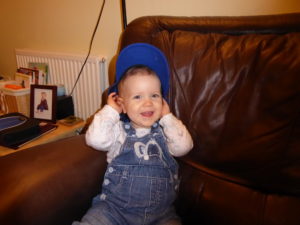 Jessah made us all laugh recently . . . . this girl LOVES food – especially anything sweet!  After Aliyah’s birthday meal, we were praying around the table like we often do – this time for Aliyah – and Kaylah and Jessah were coming in and out of the room, playing with each other.  Suddenly Kaylah came and said to me in an intense whisper:  “Jessah is eating cookies!”  I went into the lounge and sure enough, Jessah was sat with a large plate of cookies, munching away! (She’d carried the plate from it’s place in the front bedroom, all the way into the lounge!) She’d taken one bite out of 3 different cookies by the time I arrived!  She looked up at me sweetly and did the sign for “please!”  Oh my goodness, it was hilarious and it slightly interrupted the prayer time next door as everyone dissolved in laughter!  (Hannah and Aliyah didn’t even mind too much that their cookie plate for a party was slightly depleted!) And I bet our heavenly Father didn’t even mind too much that we pressed pause on the prayer time to enjoy the antics of a little person.

And another story from today . . . After six children, you’d think that I would know a 15-month old has no concept of “yesterday!”  Well, I have been reminded of that today.  🙂  I was reading Jessah a story just now before her nap and one page had a car on it.  She LOVES cars and going out in the car and started saying “car, car, car!”  I said, “Yes, yesterday we went in the car to church and saw your friends.”  A minute later I was singing her her bedtime song and she started pointing toward the door.  I laid her in her bed, like I always do and she burst into tears and started saying, “car, car, car!”  Poor girl, yesterday is a hard concept for a little girl!  She obviously thought we were going out right now in the car!  We had another cuddle and I tried to explain.  She calmed down after a while and I think resigned herself to not going out.  Lesson learned – don’t talk to your 15 month old about what happened yesterday!

Maybe we could all take a lesson from Jessah (and the apostle Paul!) . . . Forgetting what is behind and straining toward what is ahead, 14 I press on toward the goal to win the prize for which God has called me heavenward in Christ Jesus. (Philippians 3:13-14)