Today we woke up to a white, frosty world.  About six inches of snow was on the ground and more was falling fast.  After breakfast, we all trooped out in the snow to play a bit although little feet got cold quickly so we didn’t stay out long! (Watch for snow photos coming soon in our next mini-update.)

We had no plans for today so we are thoroughly enjoying that “snowed in” feeling.  I had ingredients on hand to make some stew (which fitted in nicely with our cozy winter day) and afterwards, Joel and Mariah planned a church service for us.  I don’t think I’ve laughed so hard in a very long time!  Get ready . . .

Just before the service started, Mariah asked me to check the spelling on her sign she was making for the church.  It read, “Bap mist chrch.”  Maybe she’ll be a Baptist someday but we are currently not members of that denomination!

Hannah, Aliyah, Peter and I got ushered into the playroom where the rectangular cushions from our futon were arranged as pews.  They had a little table up on top of the futon as a pulpit.  Joel, dressed in his Sunday best, started out the service by telling the story of creation and Adam and Eve sinning, very accurately told! 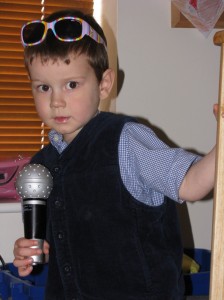 We then had a rousing congregational hymn: “Press on Mums,” by Colin Buchanan (music from cd player!).  Mariah, dressed in her Sunday best, then had a little preach from the children’s Bible (more of a children’s talk, really).  Then it was time for communion. 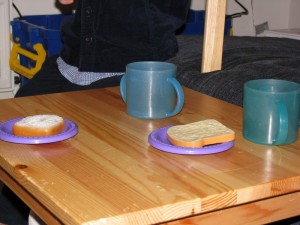 Yes, that is plastic bread with the sippy cups.

During communion, we had the very peppy tune, “Wake Up Sleepyhead,” blasting from the cd player. (Other lyrics of the song: “It’s Sunday morning and we’ve come into God’s house today.” Maybe we should try it at church sometime!)

Then we had a prayer which majored on asking God that we’d have “nice refreshments” after the service.  Preacher Joel knows what’s important!

Peter and I just about fell off our pews when the collection bag came out. 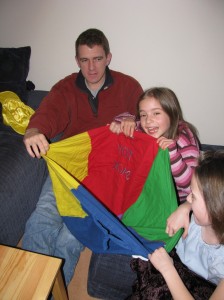 The size of the collection bag alone was enough to send us into hysterics! (Photo was taken after Peter stopped laughing!)

We had several other songs, including some more peppy calypso music and the service ended with a rousing version of “I have decided to follow Jesus.” 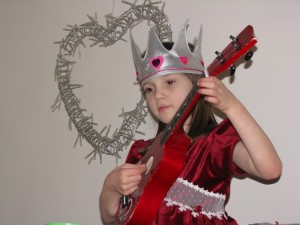 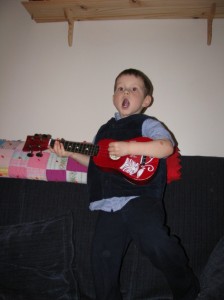 Joel getting into the groove

Oh yes, we had an “extra” sermon at the end from Joel which was about Thomas the tank engine bringing presents for all the children at Christmastime. (From the book of Hezekiah, perhaps?) 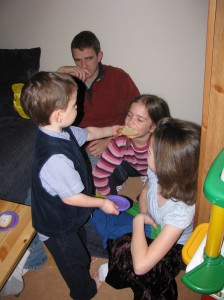 Joel gave out more bread at the end of the service in case anyone was still hungry. Hmmm. . . we’ll have to study Corinthians with him!

Afterwards, they hit the refreshments – real Christmas cookies that we made yesterday.  We definitely wouldn’t want to muzzle the oxen after all their hard work . . .

It was so much fun to laugh together.  What can I say but, I love my family!!!