Roman Baths and a Sweet Note

This week has flown past and now its Saturday.  Peter got home late Thursday night and took the day off yesterday so we decided to go to the Roman Baths.  We’ve been studying the Romans in Britain this week in school, so we thought it would fit in nicely.  Well, the day started out as kind of an adventure . . . we read about “patience” at breakfast time in our character building book and I guess God had that planned for a reason!  To make a long story short, we had decided to take the train from Chippenham to Bath but it was cancelled.  They said they’d put us on a coach, but that got into an accident, so in the end we decided to drive (after getting soaked in the pouring rain, walking up and over the train tracks with the pushchair and back again, etc.  Peter ended up having to write a letter to get his parking fee back, etc. sooooo we needed the patience for sure!  Because of the delay, by the time we arrived in Bath, it was lunchtime, so we had something to eat and then finally got to the Baths.  Here are some photos! 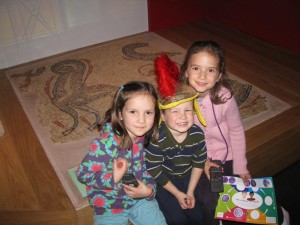 In front of a Roman mosaic tile floor

When we were talking about the Romans Baths during school on Thursday, Joel ran off and came back wearing his Roman helmet!  He asked if he could wear it for our trip to the baths, and we sure got a lot of smiles from other tourists and staff too. 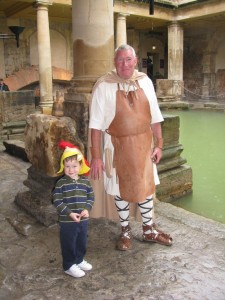 Joel even got to pose with another "Roman!" 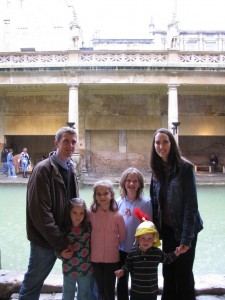 All of us Meads, in front of the "Great Bath"

For those of you (Americans perhaps!?) who don’t know anything about Bath (name of the town where the Roman Baths are located), there is a natural hot springs there that was a place of worship for the Celtic peoples who lived in the area before the Romans arrived.  When the Romans arrived, they did a lot of building on the site  – bathhouse, temple for their goddess, etc. – and an extensive complex was built where people could come and bathe in the “healing” waters, socialize, exercise, etc.  It was used from about 60AD (ish) up until when the Romans left Britain (400s AD).  Then the roof over the Great Bath fell in, mud filled it up, a city was built on top and the place was forgotten about until the 1800s when someone found their basement filling up with hot water (yes, houses were eventually built on top of the hot springs).  The Victorians excavated the place, restored it and built up walls again, etc.  The stones we walked on were actually the same stones the Romans walked on, the lead lining in the bottom of the Great Bath is Roman and there is a lot more that is original to the Romans.  It always amazes me to see stuff that is so OLD!  Anyway, the water is  very hot – about 115 degrees Faren. when it comes out of the spring and you can see steam rising off the water.  During the Victorian times, people would bathe in the water and they would pump that same water up to the “pump rooms” and drink it (yuck, how’d you like to drink your own bath water, or worse, someone else’s!).  Now, nobody bathes in it, and they filter it and pump it up and you can safely taste it.  The tour guide warned us it didn’t taste good and it really didn’t . . . apparently it’s high in iron so it has a metallic taste.  BUT its supposed to be healing for your insides. 🙂  The kids weren’t too eager to taste it, but mom made everyone pose with a glass! Look at Joel sulking because he thinks I am going to make him drink it (I didn’t!). 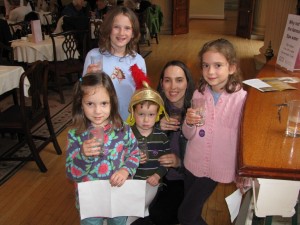 Since I am sitting here at the computer, uploading photos, I thought I’d throw a few more in.  We went to a wedding a few weeks ago.  The kids looked so sweet, I had to take a few photos.  Here are a few . . . 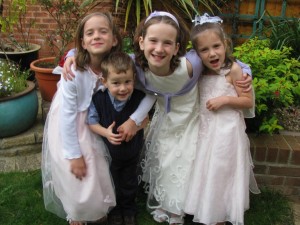 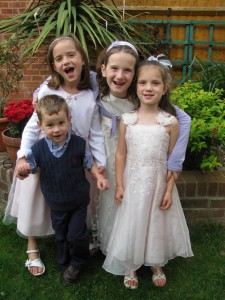 And I’ve saved the best til last . . . once in awhile, my children do or say something that is so amazing and precious.  I had to share this. . . Mariah was “resting” on my bed the other afternoon with some books.  When I came to the bed that night to sleep in it myself, I found the pile of books, plus a piece of paper with this on it . . . 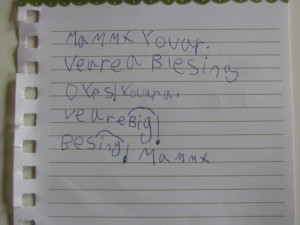 What can I say . . . at first I wasn’t even sure she’d done it without one of her sisters helping her, but after investigating, I realized she did!  Of course I was impressed with the writing and sounding out of words, but the message was one of the sweetest I have ever received.  I’ve got the best job in the world, for sure.

Mariah has taken off this week with her reading too.  If you’ve ever taught a child to read, you know a point comes when suddenly, things click and all the hard, tedious work pays off.  Yay!!! I will take a photo of her reading something soon and put it on here for you to see. 🙂