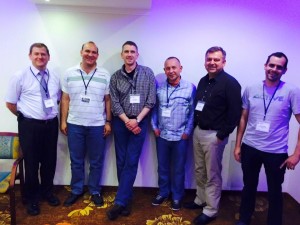 This was my sixth time attending the European Leadership Forum, and overall I would say it was a very encouraging week.  The Forum, as it is known, is a unique conference that brings together Christian leaders from all over Europe.  Really it is 26 conferences in one (they are called networks).  So I helped to lead two Bible Teachers and Preachers Networks each morning.  Then outside of that time, we had plenary sessions altogether, afternoon workshops to let folks take advantage of other networks, plus meal times and lots of “networking.”

The Bible Teachers & Preachers Networks both went well.  We had Mike Reeves and Tim Chester helping with sessions in these networks, as well as a session where I interviewed Ajith Fernando, the main Bible teacher for the week.  I also gave some afternoon workshops, spoke at a luncheon, gave two videoed interviews (i.e. answering questions), etc.  So it was a busy week.

As I said, this was my sixth Forum.  The first three I was an attender and remember getting to sit through lots of sessions, many of which were really helpful.  The next three I have been a network leader.  This is a privilege, although it does mean that I don’t get to benefit from all the sessions I wish I could attend.  I think I got to six sessions where I wasn’t speaking this time (there were at least four or five more I would have liked to attend, but I am happy to be serving.)

I expect I will remember this year as the year of the leg infection.  A tiny cyst in the skin of my leg got infected on the Monday.  I realised it was an infection rather than a bruise or pulled muscle during a session I was teaching on Monday.  Suddenly my leg was becoming painful and I could feel the heat radiating through my jeans – uh oh!  I texted a friend who was a GP and was able to see him immediately.  He then found a Polish doctor who was able to prescribe the necessary antibiotics to start fighting the infection.  Within three hours I had the medication (probably quicker than if I was at home!)  The next two days were extremely uncomfortable, but thankfully by the weekend most of the swelling had gone down and the infection has faded.  I saw a doctor at home on Friday and will be keeping an eye on it to make sure it clears fully.  It is amazing to think that pre-antibiotics, that could well have been an amputation or death, but today it was just a minor issue – what a privilege to live when we do!

Thank you for praying for the European Leadership Forum.  The picture above is of half the group that I will be investing in throughout the coming year in a “Year-Round Mentoring Group” – preachers from Ukraine, Romania, Hungary, Poland, Italy, etc.  We connected well at the Forum and will meet up again as a full group in December.

It is great to be home with family.  This has been an intense summer so far – not primarily because of being busy, but for other reasons.  Please pray that we will support each other well and keep our eyes on Christ whatever comes our way.