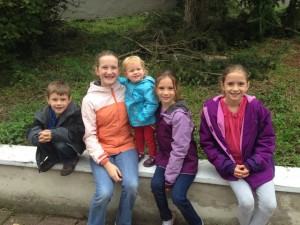 We’ve been back from our Italy trip two weeks now.  These two weeks have been extremely busy for us as we adjust to our new situation.  We shared in our last mini-update that we are praying about starting a new church and have been transitioning out of our current church.  It’s been a complicated time, full of mixed emotions, but we are thanking God for answered prayers and trusting Him to continue working as we pursue starting a new church.  We hope to send out another mini-update very shortly and will hopefully explain more details.  Some of you have asked for points for prayer too and we will get those out to you just as soon as we can.  For now, we want to share some photos with you from our Italy trip which was a huge blessing to our family . . . a hug from God just when we needed it. 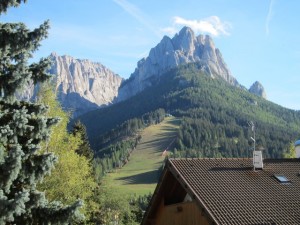 We stayed in the Val di Fassa in NE Italy at the foot of the Dolomite mountains.  This is the view from the flat where we stayed. 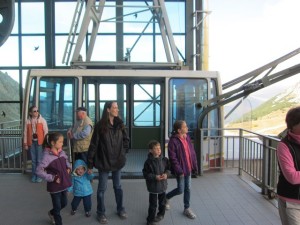 We were able to take 3 cable cars to the top of 3 different mountains. 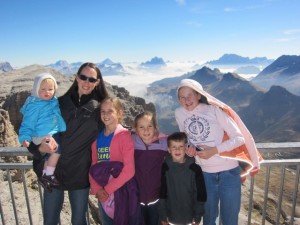 This is the top of the third mountain we went up- Sass Pordoi, the highest one in the area. 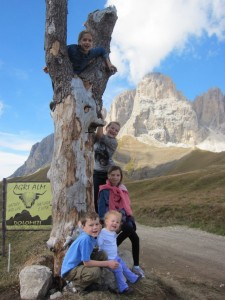 At the top of the first mountain we went up – Col Rodella. 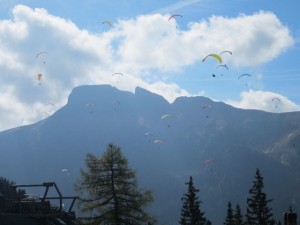 This seemed a popular spot for para-gliders and we had fun watching them jump off the mountainside. 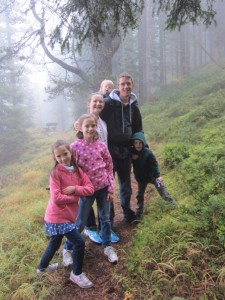 The second mountain we went up was called – Ciampedia (field of God). We arrived in total cloud and went for a hike. Some of the kids were pretending them were on a military expedition. 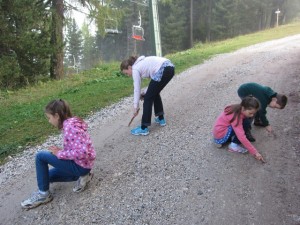 In school recently we talked about how the early Christians used to draw signs for each other in the catacombs when they were under persecution. The kids decided to make their own symbols to let people know they’d been there! Always nice for Mum to see the learning is going in! 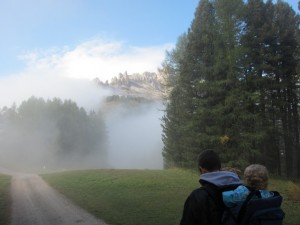 After awhile the clouds started lifting . . .It reminded me that sometimes, life is very confusing and we feel we can’t see what God is doing.  But even in the “fog” He is there, just like the mountains were there, even though we couldn’t see them at first.  He is our never-changing faithful Father.  Lord, please help us trust you in the foggy times. 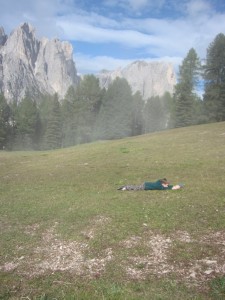 When the clouds were gone, we could see mountains in every direction! Joel had his plastic gun with him and was in his own world on the mountaintop. 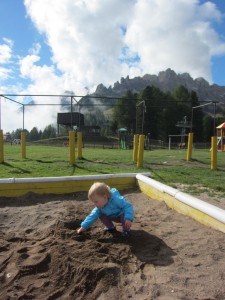 The military theme continued . . . Joel and Mariah made a “military camp” in the sandpit. 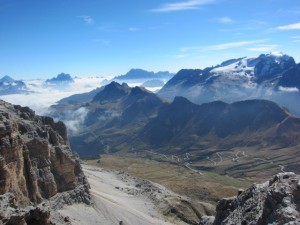 Here are some more views from the top of Sass Pordoi. It took us two tries (first day we failed!) to figure out how to get up there, but I am sure glad we persevered!  Reminded me again of another God thought: in the end, we will reap a harvest if we do not give up. 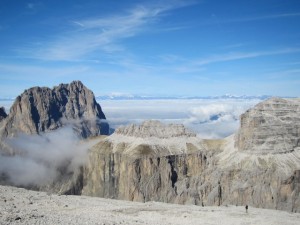 We could see the Alps in the distance in this view.  The kids were delighted to find a patch of snow too .  The rocks were so white . . . it kind of felt like being on the moon. 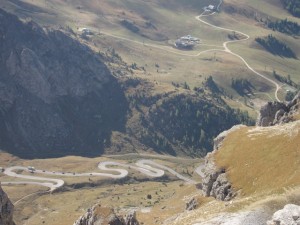 We saw the road we’d come up on way in the distance. 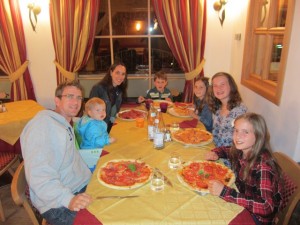 Apart from going up mountains, we enjoyed some nice meals out. Yum – Italian pizza (even a gluten free one for Mom!) 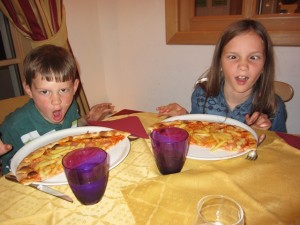 I have never seen so many types of pizza on a menu before. Mariah and Joel split a “dragonball” pizza which had ham and french fries on it! Here are their best dragon faces! 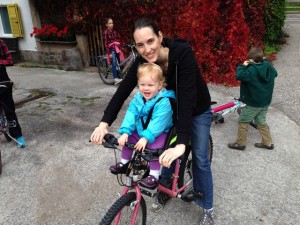 We also did some bike riding along the river that was right behind the flat we stayed in. Kaylah had a special seat! 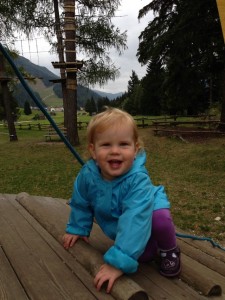 We had fun at various playgrounds too. 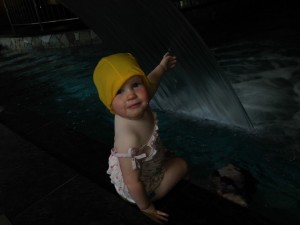 And we went swimming one morning. Caps were required . . . even for Kaylah. 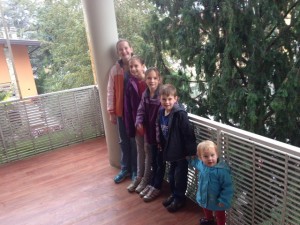 Peter took the children to the town where he grew up. They went to his old block of flats and the landlord actually let them inside the flat where he lived as it was vacant. Great fun for the kids to see where Dad grew up! Here they all are on the balcony of the flat. 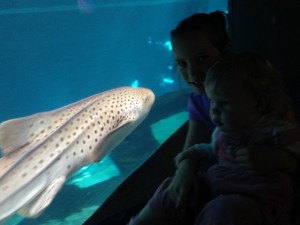 After we left the Val di Fassa, we went to stay with friends in the NW part of Italy. They were so gracious to us! One day, we all went to the acquarium in Genoa. 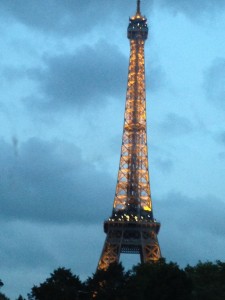 After a few days with our friends, we headed home via Paris. Our main destination was playmobil land but on a whim we decided to drive into central Paris and see a few sights. Here is the Eiffel Tower (view from the car window!) 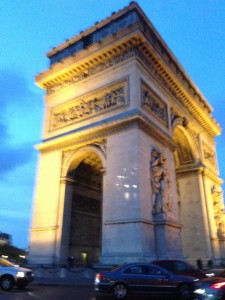 Next stop was the Arc di Triumph, all lit up. 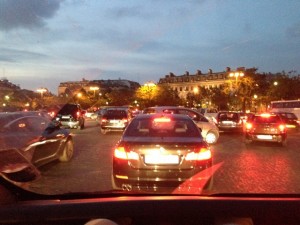 I have never in my life seen traffic on a roundabout like the one around the Arc! 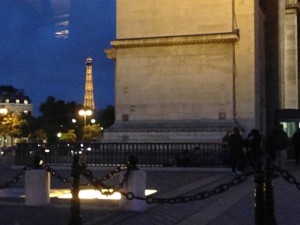 We saw the Eiffel Tower in the distance. 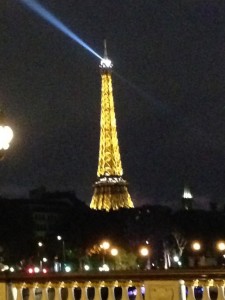 And one more view . . . our foray into Paris took us around 3 hrs . . . traffic was awful but it was fun to see these famous sights. 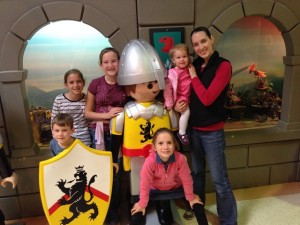 Next morning we went to Playmobil Land . . .a big building with SO much playmobil in it. Fun!

All in all it was a fantastic trip.  We made lots of memories as a family and got lots of down time too to play games, read, watch dvds and eat popcorn and just be together.  Thank you Lord for a special trip.

Peter and Joel are currently in Oregon, USA.  Peter, Ron and Dave S. are running a Cor Deo intensive this week and Peter and Dave are preaching in churches and spending time wtih supporters.  Please pray for them to have physical energy and God’s words to say as they preach and teach.  It was Joel’s turn for a special trip with Dad and he is getting lots of time with his cousins, aunt and uncle and grandparents.  The girls and I are holding down the fort here and so far we are doing just great.  Four days down and seven to go!  I thank God for good friends who are blessing us and for His peace and energy.  Thank you for your prayers. They are definitely keeping all of us going.  When Peter gets back we will send out another mini-update.