I’ll end this post by sharing about the weekend we just finished but first I’ll back up and share about the weekend before. (Meant to do this before now but . . . !)  Peter was away in Sri Lanka until the Saturday evening of that weekend.  I had a visit from my very good friend Michelle, who arrived Friday evening.  We had a wonderful day on Saturday and as we were climbing into our car to take her to the train station so she could go home, we were both commenting about how quick the time had gone and how we wished it could’ve been longer.  When I turned the key, nothing happened – my car battery was dead!  To make a long story short, she stayed until Sunday morning, which was a great blessing for both of us.  I thank God for Michelle and her friendship.  The next day, we had got to spend some unexpected time with a friend from Oakhall who came to Chippenham for his sister’s wedding the day before.  He had lunch with us and tea too, by which time our friend Anne, also from Oakahll, had arrived for a visit!  We had a lovely evening with her and then a fabulous day together on Monday.  Anne is an expert on the canals of Britain and has been canal boating on all of them except the one  which is near to us, The Kennett and Avon Canal.  So we took advantage of a very cold but gloriously sunny day and went over to the Caen Hill Flight, which is a set of 29 locks on the canal. I had been wanting to take the children there and it was wonderful to have our sweet friend Anne with us, to explain how the locks worked.  Very fascinating! (Take a look at “Caen Hill Locks” on wikipedia if you’re interested.)  Here are some photos! 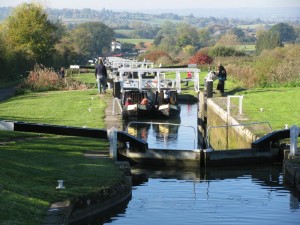 This view is from near the top of the locks. Notice the gorgeous countryside, all around. 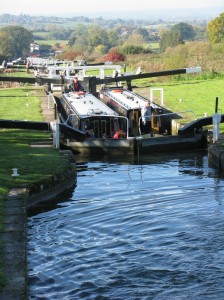 Two canal boats coming through the locks, side by side. They are in the process of being raised up to the correct water level as water is spilling into the lock they are in. 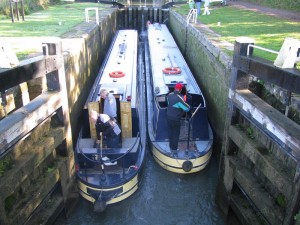 Entering the next lock . . . the gates will close soon and then they'll be raised up to the next level. 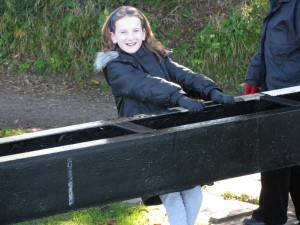 The canal boaters (on holiday) were very friendly and had no problem letting us all help open and close the locks. 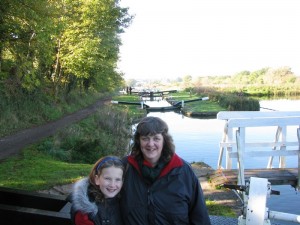 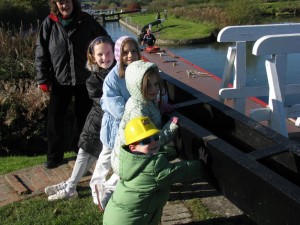 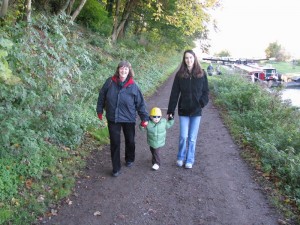 Anne, Joel and Melanie walking on the "towpath" where horses used to pull the canal boats along (Joel insisted on wearing his Bob the Builder hat on our outing!) 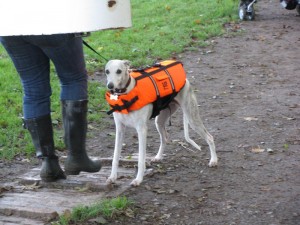 Joel asked if we would take a photo of this dog with a life-jacket on - cute! 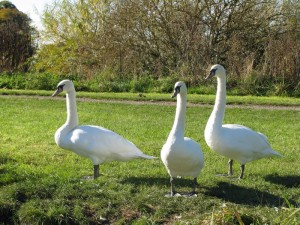 The side-ponds on the canal were full of wildlife, especially water birds. The swans were beautiful but we didn't get too close!

All in all, it was a fun and educational day out.  I definitely learned a lot.  We came home and most everyone joined in a game of monopoly.  Then that evening before Anne left, we had some singing time with Peter on the guitar and Mariah and Joel alternating between various instruments, making a joyful noise. 🙂  We thank God for “Auntie Anne” and the way she fits so naturally into our family.

So . . . fast forward to this past weekend . . . the previous week was very busy.  Honestly, I didn’t feel very motivated to go to the conference Peter was scheduled to speak at.  I was tired and it just all felt like too much to pack up and go as a family.  Peter and I felt that there was spiritual warfare going on.  We had a disagreement on Wednesday night which we worked through but left us feeling quite broken and vulnerable.  Then on Thursday night, Peter started feeling like he was coming down with a cold – not good timing.  Anyway, we prayed and asked several others to pray and now, looking back at the weekend, we can really see how God came through for us!!  I am so glad we went.  We praise Him and give Him all the glory for any good that has come out of the weekend.  It’s in our weakness that God has the opportunity to show Himself strong.

The conference was a gathering of evangelists in Britain and their families.  What a great group of godly people they were!  Our children thoroughly enjoyed the weekend and had a great time with the other children especially.  The four of them sang “The Wise Man Built His House Upon the Rock” with Hannah accompanying them on the guitar for the talent show on Saturday night.  Unfortunately, I forgot the camera, but they did a great job!  Peter spoke on the subject of “Partnership in the Gospel” and God really spoke through him powerfully.  I know I was challenged and encouraged by the 3 messages I was able to hear.  Since I don’t often get to go with Peter on these trips, it was great to see God use Him firsthand.  One message was on parternship in marriage and the conference organizer had asked me to share for a few minutes on the subject before Peter’s message.  I was very nervous but it seemed to go well and I hope it was an encouragement to people.  It was more of a reflection and a testimony to God’s goodness than anything else.  Anyway, this post is very long (what’s new with my posts!) so I will finish it now.  Thank you for your continued prayers for us.  This weekend was an evidence of the massive difference that your prayers make.  We aim to send out a short update by email soon, so watch for that.