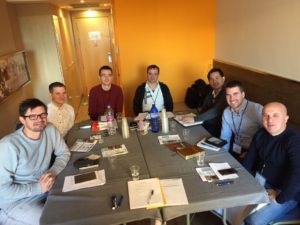 Here are the preachers that I got to spend time with!

This week I had the privilege of a quick trip to Barcelona in Spain.  My colleague, Mike, and I, hit the road at 3am on Monday to travel to Barcelona.  We arrived before lunch, which was when our first segment of the visit began.  Mike was participating in a two-day training session to learn how to lead the Bible Teachers Networks more effectively at the European Leadership Forum.  At the same time, I was leading a two-day training session with seven preachers from Poland, Albania, Ukraine, Hungary, and Ireland. (Several were unable to make it to Barcelona and so the group was smaller than it could have been.)

We had a great two days together.  I was able to give instruction on subjects that are harder to convey in our regular webinar format, and they were each able to preach a sermon and receive feedback.  We all felt ministered to by God’s Word.  Speaking of which, I was also responsible for leading morning devotions for the whole gathering (about 80 people) on each of the three mornings we were there.  While our little group were squeezed into a hotel bedroom that had been converted for our course, it was so good to get out and enjoy the beautiful beach (even if the temperature was really cold!) 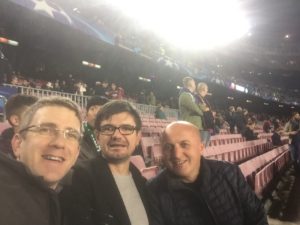 With Juli and Zef in the Camp Nou!

On the second evening I was able to go with two of the guys to watch Barcelona play a Champions League match.  It was a great experience to be there and to see one of the greatest players of all time, Lionel Messi, up close.  We think the club gave us much better tickets than we paid for because we bought tickets that were very high up at the back of the stadium, but instead found ourselves two rows from the pitch!

After the 48-hours with my group of preachers, Mike and I were then together with a group of network and national leaders for a 24-hour learning community where we sought to make plans for the forthcoming European Leadership Forum.  Again, it was a good time.  Mike and I made it home safely on Thursday evening at 11pm.  Thanks so much for praying for us and please do pray for the men in my preaching group this year – each one is serving faithfully in often challenging circumstances! 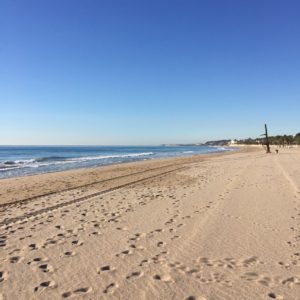 A beautiful setting for ministry in December! 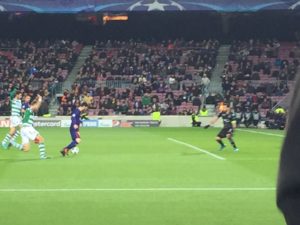 Lionel Messi breaking through for a shot on goal (saved!) 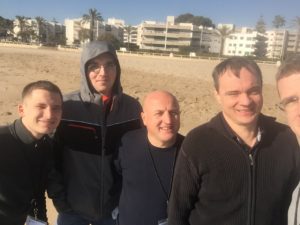 I was not successful at being in this group- selfie!